We offer 2 tours in Antsirabe having in total 18 customer reviews. Tour durations range from 14 to 15 days and the top tour categories in Antsirabe are natural landmarks sightseeing, adventure & trekking.. Our Antsirabe tours are offered by 1 qualified and hand-picked tour operator and each Antsirabe trip comes with a best price guarantee and no added booking fees.

2 Trips in Antsirabe with 18 Reviews 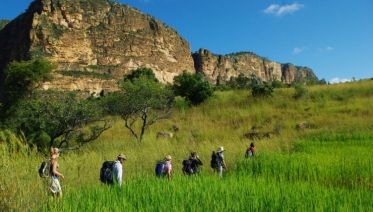 of 9 reviews
“This trip has the perfect balance of lovely drive days, intercepted by lovely authentic village walk ...”
SaveUS$ 172
From US$ 3,449 14 days View Tour
Next Departures 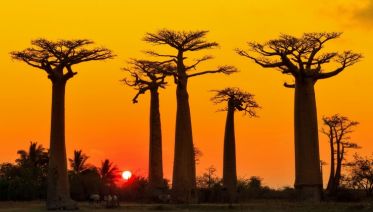 of 9 reviews
“A rather hectic journey taking you from Antananarivo, the capital city, to the East and then to the ...”
SaveUS$ 217
From US$ 4,349 15 days View Tour
Next Departures
Showing 1 - 2 of 2 results
No results for your search criteria
Try clearing your filters to get more results
Create your custom-made trip to Madagascar

Travelling to Madagascar? Chat with a local travel specialist in Madagascar who can help organize your trip.

5 - Excellent
Based on 18 customer reviews
Well timed, excellent tour guide, uniquely beautiful Reviewed Tour: Trekking in Madagascar
5 - Excellent
“This trip has the perfect balance of lovely drive days, intercepted by lovely authentic village walks with a great knowledgeable local tour leader who was so accommodating in every way. The scenery is lovely, the food is good, the diversity of things seen are unrivalled. Madagascar is lovely, especially during the dry season.”
Fascinating experience Reviewed Tour: Trekking in Madagascar
4 - Very Good
“The trip was a great experience. Madagascar is very different to anywhere else I've been in Africa. The tourist industry is less developed, which in itself added to the 'adventure'. This does mean that there was no alternative to eating in the hotels along the way. We covered a lot of ground, which leads to long hours in the bus, but there is lots to look at along the way, and it's the only way to see all the different locations that we visited. The unmade road to Andringita National Park was an experience in itself - in 4x4 jeeps, with planks on top, in case they are needed (and they were) to enable us to cross basic wooden bridges. We saw less wildlife than I had hoped, but never had the dispiriting experience of seeing nothing!”
Trekking in Madagascar (September 2016) Reviewed Tour: Trekking in Madagascar
5 - Excellent
“A very busy but well paced trip that I thoroughly enjoyed. The trekking is tougher than I'd expected, due to the heat, and there were some stiff climbing and descents, but the paths were very good and the views en route were stunning. Both Isalo and Andringitra, where the majority of the trekking takes place, are very different and offer very different experiences. Madagascar is an interesting country, quite different to other places in Africa that I've been too, but sadly, almost totally deforested nowadays, so the distances between the various national parks are several hours drive apart, meaning some long sessions on the bus. However, the scenery is very interesting nevertheless - Madagascar is not a flat country so there is plenty to look at while you drive. A nice touch was that the bus would stop one side of a village, you'd all get out and the bus would drive a couple of miles up the road allowing you to amble through the village to break up the journey - we did this several times and they were very welcome breaks. This did mean, however, that there was very little wildlife to see outside of the parks, and indeed, within them sometimes. I had expected more if I'm honest, however, our tick list of Lemur spieces was still good - around 6-8 I think. In Ranomafana, the rainforest, we saw quite a few, although they tended to be high up in the canopy. The night walk we did here was excellent though - our guide managed to find 2 mouse lemurs in the dark, and there were lots of Chameleons, and this was definitely worth doing. The beach resort at the end was paradise. You have a free day and although the whales had gone, so that trip was out, some of us elected to visit the fishing village just up the coast, which I loved. You can easily walk to the village, by turning left out of the lodge, but the paid for visit allows you to wander around the village itself, rather than just watching all the boats on the beach. In the afternoon, we visited the "Spiny Forest", which was actually more of a botanical garden, but still interesting. On the camping portions on the trip, the first two nights (in Andringitra) were very basic, and it got quite cold at night, but the 3rd night was at a lodge, which was lovely - and they sold beer there - so was a very welcome place to end the time in the national park. In Isalo, the camp site is in a lovely location, and the porters had kindly brought a couple of crates of beer with them, so we had beer that night too, so it was only the first two camping nights were we had no beer and very basic facilities. The hotels were all excellent and tourist standard for Madagascar. They all had patchy Wi-Fi and the restaurants and bars were good and all sold beer, so we didn't need to leave the hotels in the evening to eat or drink. However, there is only 2 places where you stay for 2 nights, and we tended not to arrive until tea-time, so there was very little unpacking. I think I only had one cold shower during the two weeks.”
Read More Reviews