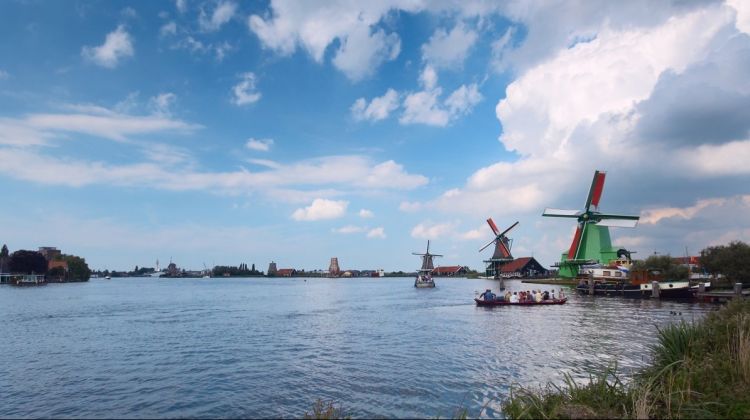 HIGHLIGHTS
From the churning windmills in the Zaanse Schans to the cheese weighing house in Edam, this tour highlights everything typical Dutch. See the beautiful landscapes of North Holland and explore the traditional fisherman village of Volendam on a 5 1/2 -hour guided tour from Amsterdam.
Learn about clog making in the wooden shoe shop and try some tasteful Edam cheese.

Escape the hustle and bustle of Amsterdam on a half-day guided tour of the Dutch countryside, starting with a 20-minute drive to the windmill village of Zaanse Schans. This outdoor conservation area is situated on the banks of the Zaan River and is home to traditional 18th and 19th century architecture, including several functioning windmills.

Watch live demonstrations of craftsmen at work, including a clog maker crafting the famous wooden shoes of the Netherlands. There will be some free time to explore the village on your own, before traveling through the distinctive polders (land reclaimed from the water) of the Beemster area.

From there continue on to Edam, also commonly referred to as the pearl of the Zuiderzee. Edam’s ancient streets and tranquil canals are lined by beautiful 17th century buildings, including the leaning Carillon tower, the Great Church, and town hall. Most famous in Edam is beyond any doubt the public weighing house, where in summer still every Wednesday the famous Edam Cheese is being sold.

After a stroll around this history-rich town, you’ll have the opportunity to see how Edam’s world-famous cheese is made and, of course, to taste it in a closeby cheesefarm.

Finally, you will stop in the beautiful seaside village of Volendam. This typical fishing village with its bustling harbor has been a major tourist attraction as early as 1875. People come from all over to see the small buildings and houses and take in the locals in their traditional Dutch clothing. This is a great place to pick up souvenirs for those at home or a memento for yourself, and to have photos taken in traditional Dutch costume. Your guide will take you on a short walk through the oldest parts of the city, exploring a labyrinth of twists and turns to sites such as St. Vincent’s Church, the wooden Stolphoevekerk and the Visafslag (Fish Auction).

Please be noted that the order of visiting the villages in the description can be different on each day.
View More
WHAT'S INCLUDED WHAT'S EXCLUDED
Why Book with Bookmundi
What are customers saying about Bookmundi
Excellent
4.72 Average 298 Reviews

Other Practical InformationWe have the following pickup points: Addresses: • Heineken Experience bus stop, Stadhouderskade 78, Wait on the side of the main entrance of the Heineken Experience, not on the water side) • THIS IS HOLLAND , Overhoeksplein 51, opposite central station. Catch the 5 minute free ferry (buiksloterweg) behind the station to get here. ( Check-in desk inside the entrance of THIS IS HOLLAND) Departure time: From November 4th 2019: • Heineken Experience bus stop at 10:00AM • Last pick up point: THIS IS HOLLAND at 10:30am • From March 20th 2020: • Heineken Experience bus stop at 08:30am • Last pick up point: THIS IS HOLLAND at 09:00 am This tour involves a small amount of walking. Comfortable walking shoes are recommended. Drive in 30 minutes to Edam Walk during 40 minutes with your guide through this wonderful small city. Drive in 15 minutes to Cheesefarm Alida Hoeve. See how cheese is made and taste more then 25 different types of Gouda Cheese. Drive in 10 minutes to the fishing village of Volendam. Walk during 20 minutes together with your guide. Discover the village during some free time own your own. Drive in 30 minutes to Zaanse Schans. Walk together with your guide and listen to the interesting facts of the village. Join the wooden shoe demonstration in the wooden shoe factory. Discover the village on your own during free time. Drive in 20 minutes back to Amsterdam.
NEED HELP OR HAVE A QUESTION ABOUT THIS TOUR?
If you have any question about this tour or need help with planning a trip, please do not hesitate to get in touch with us. We're ready to help.
Ask a question
hours 06 From US$ 56
CHECK AVAILABILITY
Response Time: 1 hour Response Rate: 100% MAKE AN ENQUIRY