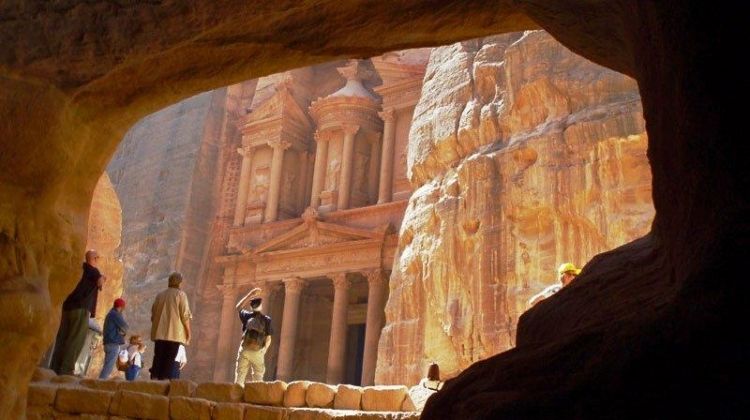 Tour with Flexible Booking Policy
HIGHLIGHTS Download trip notes
Starting and ending in Amman, the "Jordan On A Shoestring" trip is a guided city sightseeing tour that takes 6 days. You will travel through Dead Sea, Wadi Rum, Petra and 3 other destinations in Jordan. "Jordan On A Shoestring" is a group trip which includes accommodation in hotels, transport, meals and others.

This fascinating tour of Jordan ticks off all its most noteworthy sights including Jerash, Petra, the Dead Sea and Amman. You will also experience a thrilling jeep safari and a night at Bedouin camp in the Wadi Rum desert.

Beginning and ending in Amman, we'll start off by exploring the capital city, visiting the Citadel and the 6,000 seat Roman theatre. The well-preserved Roman ruins at Jerash are next on the list before the tour heads south, driving along the picturesque King's Highway to Petra, passing Madaba, Mount Nebo and the impressive Crusader Castle at Kerak.

One full day will be spent venturing around the charming 'Rose Red City' of Petra. Starting with a walk, you will be led through the snaking Siq to view the 2,000-year-old Treasury. Here, you can enjoy a morning guided tour of this eye-catching location and you'll have some time to explore the area by yourself.

The Jordan tour will continue south and spend the night in the Wadi Rum desert. You will enjoy a 4x4 jeep safari before the tour heads north to the Dead Sea, giving you a chance to swim in its famously salty waters before we head back to Amman to conclude the tour.

Upgrades are available to 4 or 5-star hotels on request.
View More

No additional cancellation fees apply for this Jordan on a Shoestring tour. You can cancel the tour up to 56 days prior departure and avoid paying the full amount, but your deposit paid is non-refundable. No refund applies for cancellations within 55 days of departure.

Jordan on a Shoestring tour requires that you have adequate and valid travel insurance covering medical and personal accidents, including repatriation costs and emergency evacuation. We recommend using World Nomads' travel insurance.

For this Jordan on a Shoestring tour getting the required visa(s) is the responsibility for each individual traveller, as visa requirements vary depending on your nationality. We recommend to check with your local embassies representing the countries that you are travelling to, as part of this itinerary.

NEED HELP OR HAVE A QUESTION ABOUT THIS TOUR?
If you have any question about this tour or need help with planning a trip, please do not hesitate to get in touch with us. We're ready to help.
Get help
days 06 From US$ 860
CHECK AVAILABILITY
Response Time: 2 hours Response Rate: 100% MAKE AN ENQUIRY

Tour is operated by : Encounters Travel
6 Reviews
Currently 17:54 in Leeds - Open Now MAKE AN ENQUIRY Response Time: 2 hours Response Rate: 100%
Download Trip Notes Enter your email to get a PDF file containing all the trip information for the Jordan on a Shoestring tour.
Trip Notes Sent
We have sent the trip notes for this tour to:

If you book the Jordan on a Shoestring tour within the next 5 days, you can get by applying the following code: