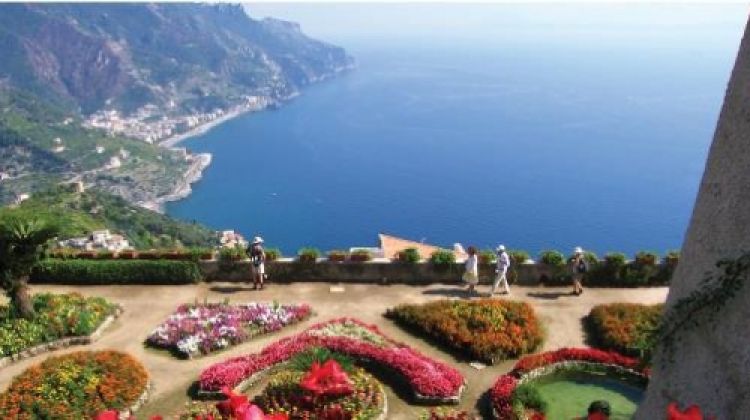 An unrivalled Italian coastal walk following in the ‘Footpath of the Gods’. Take a spring early summer or autumn walk in the Mezzogiorno –“The land of the midday sun” - along Italy’s stunning Amalfi Coast. A land where the mountains, marquis pastures, lemon groves, vineyards and villages meet the sea. A place where you could be strolling on a rugged trail for one moment and then in the next be winding down through a citrus grove then through a pleasant village towards the blue waters of the Mediterranean, gelati in hand. The region is a deeply romantic place and for good reason; here you will find that golden light making the cliffs glow creamy gold, while the waters below graduate into an aquamarine haze. Then there are the greens of the cliff tops being speckled with the spring flowers and herbs of the Mediterranean “Macchia” shrubland. The towns, villages and towers that cling to the cliffs, can be a riotous mix of vibrant colours and tempered pastel shades. There is so much history, the Greeks settled here in the eighth century B.C. and looking down you can almost imagine the Argonauts rowing by enroute to tackle some Titan. The Romans came next, building villas around Positano and on Capri. There was much destruction caused by Vesuvius in the geological record and not just at Pompei and Ercolanium some villas were rebuilt even on the Amalfi Coast. In the early mediaeval period Amalfi became a major maritime city state claiming to have invented the compass and some aspects of parchment manufacture. Today the town remains much as it was with narrow lanes and St. Andrew’s Cathedral dominating the scene. We walk through this spectacular region using the extensive web of footpaths and mule tracks that thread along the cliffs and a wealth of natural and cultural treasures can be reached relatively easily. We pass close to beautiful monasteries, caves and ancient farmhouses, visit nature reserves and ruins of paper mills, whilst enjoying spectacular views during all the walks. We also walk through the historic towns of Amalfi, Atrani, Ravello, Scala Praiano and Positano, all little pearls set in a fantastic landscape. You could extend your stay with a number of walks on the “Finis Terrae” (Land’s End) of the Sorrentine Peninsula, the marine nature reserve of Punta Campanella, and on the famous island of Capri.
View More
CUSTOMER REVIEWS
5 - Excellent
Based on 1 review
Excellent
5 - Excellent
“A superbly organised and most enjoyable trip.”
ITINERARY Expand All
WHAT'S INCLUDED
Accommodation
Meals
Transport
Others
WHAT'S EXCLUDED
Monthly Price Comparision
Why Book with Bookmundi
What are customers saying about Bookmundi
Excellent
4.70 Average 323 Reviews

No additional cancellation fees apply for this Classic Amalfi Coast - 8 Days tour. You can cancel the tour up to 70 days prior departure and avoid paying the full amount, but your deposit paid is non-refundable. No refund applies for cancellations within 69 days of departure.

For any tour departures within 07 May 2021, full payment is required. For tours that depart later than 07 May 2021, a deposit is required to confirm this tour, and the remaining balance will be charged 69 days before trip departure.

For this Classic Amalfi Coast - 8 Days tour getting the required visa(s) is the responsibility for each individual traveller, as visa requirements vary depending on your nationality. We recommend to check with your local embassies representing the countries that you are travelling to, as part of this itinerary.

NEED HELP OR HAVE A QUESTION ABOUT THIS TOUR?
If you have any question about this tour or need help with planning a trip, please do not hesitate to get in touch with us. We're ready to help.
Get help
days 08 SavingUS$ 55
You have unlocked exclusive savings:
5% OFF TODAY From US$ 1,100 US$ 1,045
CHECK AVAILABILITY
Response Time: 3 hours Response Rate: 100% MAKE AN ENQUIRY

Tour is operated by : Sherpa Expeditions
200 Reviews
Currently 15:59 in London - Open Now MAKE AN ENQUIRY Response Time: 3 hours Response Rate: 100%
Download Trip Notes Enter your email to get a PDF file containing all the trip information for the Classic Amalfi Coast - 8 Days tour.
Trip Notes Sent
We have sent the trip notes for this tour to:

If you book the Classic Amalfi Coast - 8 Days tour within the next 5 days, you can get by applying the following code: