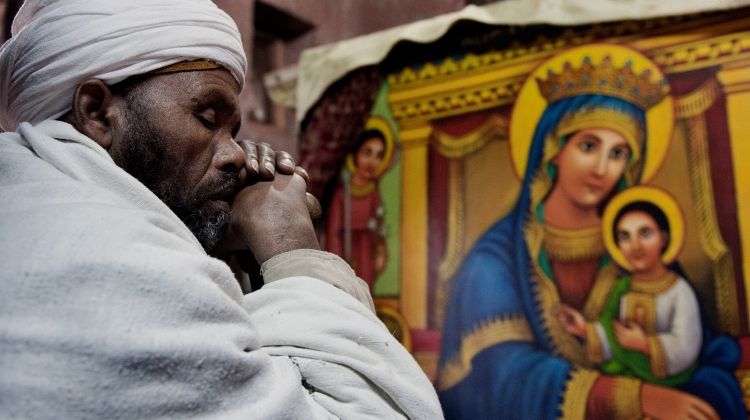 HIGHLIGHTS Download trip notes
Starting and ending in Addis Ababa, the Ethiopia In Depth tour is a guided cultural, religious and historic sites tour that takes 13 days. You will travel through Axum, Lake Tana, Lalibela and 6 other destinations in Ethiopia. Ethiopia In Depth is a small group tour which includes accommodation in hotels, transport, meals and others.

In the northeast of Ethiopia is the little visited region of Tigrai. Over the centuries a series of churches of differing sizes and architectural styles were carved into cliff-faces and rocky-outcrops, many still in use today. Whilst following Ethiopia’s classic northern circuit through Lake Tana’s monasteries, Gondar’s castles, the Simien Mountains and Lalibela’s monolithic churches, we get off the beaten path and explore this beautiful region in the heart of Ethiopian history.
View More
CUSTOMER REVIEWS
4.5 - Excellent
Based on 5 reviews
Ethiopian Odyssey
5 - Excellent
“This was a fascinating journey through northern Ethiopia. We saw churches and monasteries galore, each one interesting for its paintings or architecture, often hewn out of the living rock. The road journeys were long but the scenery and the sheer engineering feats involved made it worthwhile. Accommodation throughout was much better than I'd anticipated; we had en suite facilities in all hotels and hot water was usually available.”
Ethiopia in depth
5 - Excellent
“A fantastic trip to an amazing country. The travelling was sometimes long and hard but the scenery and sights made it all totally worthwhile.”
Ethiopia in Depth - Timkat Depature
4 - Very Good
“A very enjoyable trip in a very interesting country. Ethiopia is a fast growing and exciting country, and within Africa, a population second only to Nigeria. The infrastructure is improving fast and its mainly young population are starting to enjoy the freedoms of an education and an emerging confident country. The rural areas remain very poor, but infrastructure, including electricity and improved irrigation and transport links, mean that Ethiopia is no longer the barren, drought prone region imagined by most westerners. In fact, during the rainy season, it must be one of the greenest countries in Africa, and the people are generally very friendly and welcoming. Addis in particular is something of a building site, but most of the other towns have concrete shells intended as future apartment blocks and hotels, and there are apparently more university graduates than jobs in many areas - so the future of the country appears bright - although there are still challenges with over-population and the amount of available land for farming. Most people are still subsistence farmers, and the economy is yet to open fully (you can't own land for example), and if the population is to continue growing, more efficient methods of farming will need to be adopted. However, Ethiopia is already a generally good place to travel. The hotels are good and clean, and despite the worries of others, hot water is generally available, and most places have Wi-Fi of varying quality. The country also yet, hasn't become a tourist mecca, meaning you will not have the place to yourself, but you certainly won't be experiencing the crowds of other more well known destinations. The scenery is wonderful - I hadn't realized quite how mountainous most of the country is. We were there in the dry season, but it was clear that following the rains, when everything greens up, it must be spectacular. Ethiopia is also very culturally distinct from anywhere else I've been in Africa - things start to look very "Ethiopian" quite quickly, being a blend of Jewish, Arabic and both north and southern African, as well being close to Sudan, so it comes across as a real melting pot of cultures and ideas.”
A Wonderful Tour
5 - Excellent
“Amazing culture, history and scenery.”
Read more reviews
ITINERARY Expand All
WHAT'S INCLUDED
Accommodation
Meals
Transport
Others
WHAT'S EXCLUDED
Monthly Price Comparision
Why Book with Bookmundi
What are customers saying about Bookmundi
Excellent
4.71 Average 333 Reviews

No additional cancellation fees apply for this Ethiopia in Depth tour. You can cancel the tour up to 62 days prior departure and avoid paying the full amount, but your deposit paid is non-refundable. No refund applies for cancellations within 61 days of departure.

For this Ethiopia in Depth tour getting the required visa(s) is the responsibility for each individual traveller, as visa requirements vary depending on your nationality. We recommend to check with your local embassies representing the countries that you are travelling to, as part of this itinerary.

NEED HELP OR HAVE A QUESTION ABOUT THIS TOUR?
If you have any question about this tour or need help with planning a trip, please do not hesitate to get in touch with us. We're ready to help.
Get help
days 13 From US$ 3,979
Unlock US$ 199 in extra savings CHECK AVAILABILITY
Response Time: 1 hour Response Rate: 100% MAKE AN ENQUIRY

Tour is operated by : Exodus Travels
4280 Reviews
Currently 12:31 in London - Open Now MAKE AN ENQUIRY Response Time: 1 hour Response Rate: 100%
Download Trip Notes Enter your email to get a PDF file containing all the trip information for the Ethiopia in Depth tour.
Trip Notes Sent
We have sent the trip notes for this tour to:

If you book the Ethiopia in Depth tour within the next 5 days, you can get by applying the following code: